Last weekend I was just finishing up this card, and my daughter dropped by.  I said that I had just finished the card, and was wondering what kind of a salutation to put on the card.  I thought it was kind of masculine, but would also make a nice sympathy card.  Laura said that she needed a sympathy card for a friend who had just lost his mother.  I said, "Well, now the decision is made!  It's a sympathy card, and you can have it."  But, before she could have it I made a second one for myself.  Why not, I had every thing out already, and it was so much fun to make.  I first stamped the branch in Bashful Blue on the large circle of Very Vanilla.  Next I colored the birds on the stamp with Cajun Craze and the branches with Midnight Muse, then I stamped it and punched a circle with a 1 3/4" punch.  I backed the small circle with the Cajun Craze and placed it over the first image, but raised it with Stamping Dimensionals.  The salutations are from Petite Pairs stamp set, and the printed background paper is from Comfort Cafe DSP and the solid is Midnight Muse.  I used the blue 3/8" denim ribbon form SU.   I just love making a card, and having a use for it right away, even though I had nothing planned when I made it.  I was glad not to put it away in my stash. 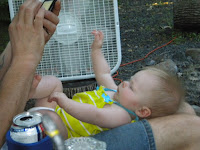 So while I was making cards, my daughter was knitting a hat for a baby gift, and they guys were sitting out under the umbrella table, with a box fan blowing on them because the temp was 96 degrees, they were drinking cold beer and playing with the "aps" on their cell phones.  Tom had downloaded some videos I told him I play for baby Olivia, that were lullabies with the wild lights that move to the music from Fisher Price, no less.  Kept baby happy for a little while.  Then they took a photo of the girl on the Millers Beer can, and did a search for who was the girl in the picture on the beer can?  Turns out they found out her name, and that she was the granddaughter of the owner of the brewery.  Go figure!!  Well, whatever it takes to keep the guys happy while the ladies are crafting!!
Hope you have a little crafting time for yourself today.  I'm heading out for another weekend at our little retreat at the DN (stands for Do Nothing) Campground.
Mary Alice