Frest start to a new week and another card challenge 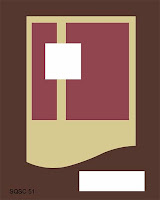 I decided that I would kick off the new week with a new challenge.  I worked all weekend on some halloween cards that I am making for a big swap next weekend.  I don't exactly like doing cards in assembly line fashion, but that's what I did to get 45 cards prepped.  I did all the stamping, punching and cutting I could do while I was up at the campground retreat this weekend.  I did all I could do without my circle die, which I left at home :(  So, after I got all the scraps, cuts, and pieces put away until I could come home and assemble cards, there was still a little daylight remaining.  I decided that one card for the fun of it was in order.  I had all this black and grey and orange sitting around, so I decided to do the Color Throwdown Challenge 204 to use Basic Grey, Poppy Parade (I had Real Red), Very
Vanilla and Punpkin Pie.  Those colors were all at my ingertips.
I went looking for a sketch hallenge to go with it, and found that Stampin Queen's Sketch Challenge 51 was just the inspiration I needed.

I was most inspired by that onderful curve on the paper.  I had been working with straigh cuts all day, and I needed to switch it up.  To make things more fun, I reached randomly into my tote and pulled out a random stamp set, and I pulled our Bordering on Romance.  Lucky me!  I got to do a little stamping with the Pumpkin Pie, and pulled out my favorite, the blender pen, and  I did a little coloring with the Pumpkin Pie, the Real Red, and the Basic Grey.  My husband came along and lit the lantern and put it on the table, because I was losing light out on the porch, and I did feel the dampness creaping in.  How the weather has changed in the last week.  I kind of forgot that the sun was going down earlier, too.  So, I hurried through finishing my card, but was pleased with the outcome.  When I pulled that card out today to take a photo, I thought....hmmmm, either my eyes are getting bad (which they are), or the light was getting bad (I'll blame it on that), but my coloring just isn't that good.  And, I wish I would have matted the Vanilla layer.  I maybe will have to go back and give this one another try.  I think I'll use the sketch again sometime, and definitely the colors. 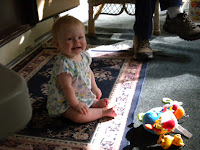 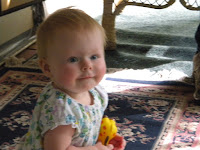 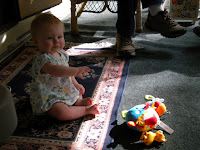 And, this was my inspiration for my every smile this weekend.  Olivia is seven months old this week, and she is getting to be such a good sitter, but she has little ambition to move around.  She sometimes rolls around the floor, but we want to see some crawling action.  We decided to put her favorite toys a little out of her reach to see if she would figure out how to get them.  She did!  She learned to screach really loud, and point, and grandpa would give them to her.  Grandpa played a game that he would hide a toy under the rug to see if she could find it.  You betcha she did!

Hope you have a good week, and come back to visit real soon.
Mary Alice