The Glitz and Glamour

I wanted to share a card today that I made the night before I went to New York.  I had gotten a box of new supplies from Stampin' Up!, and I was dying to do a little playing.  I got new embossing powder!!  I have not embossed in about a year, because my heat gun had died, but I replaced that a couple months ago.  Then, I realized that all my metallic embossing powder was so old it actually tarnished!!  So, that left me with black or white, or clear embossing powder.  That's no fun.
So, I got new gold and silver embossing powder, new glitter, champagne glitter paper, and beautiful antique brads.  I am ready to do some glitzy stamping :)

This is the first time I used my new Ornament Keepsakes for a card.  I have been making some 3D ornaments for my craft sale, but had not stamped a card yet, so starting with embossing was fun.  It's been a while since I embossed, and have not had much success, so I did a bunch of experimenting before the card came together.  I wanted to stamp the gold embossing on Cherry Cobbler cardstock, but my first ornament was not very good, because the embossing powder did not seem to stick.  I had used Top Boss embossing ink, and it's been along time unused, so I reinked it, and tried again, without much success.  So, I switched to Versamark pad, and same thing.  Hmm?  I decided that maybe the color just was not right, like the Cherry Cobbler being dark makes the gold come out dark, too.  I switched to Very Vanilla Cardstock, and had success immediately.  Tried both kinds of ink with good results from both.  I'll have to do a little research later, but for now, I am very pleased with the way the ornament turned out. 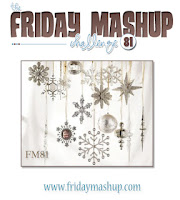 For this card, I embossed the background with stripes.  I used paper from Candlelight Christmas Specialty DSP, and Cherry Cobbler seam binding to make that triple bow.  I backed the ornament with the Champagne Glitter paper, and added a few rhinestones that were colored red with a permanent marker.  The greetings inside and out come from More Merry Messages.  This card is so stunning the photo does not do it justice. 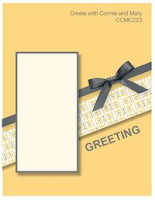 Hopefully my photos will improve with my new camera that my daughter, Laura bought for me.  She told me that my photos on my blog were terrible, fuzzy, and off colored.  And, that I needed a new camera before I head to New York to see my grandson, because last year I came home very disappointed in the poor pictures I took.  It was time for a new camera.  Do I have a sweet daughter, or what??  Now I just need a light box (maybe for Christmas).

This beautiful card will be submitted for a couple challenges at Friday Mashup #81 where the challenge was to use an ORNAMENT and/or SPARKLE, and I think I did that.  I used the lovely layout from Create with Connie and Mary's Card Challenge #223, which was such a fun layout I will surely use often.  The Christmas Card Challenge #47 was to use BOWS, so I made a triple, super-duper one.
Hope you enjoyed my card today.
I am off to see the glitz and glamour of Manhattan tomrrow.  We are going to see the Late Show with David Letterman on Thursday.  Yeah!!  That should be fun!  The famous Carnegie Deli is close to the theatre, so I told my husband I want to eat there also.  Then, who knows where we will head next. We are off to explore the city on our own for the day.